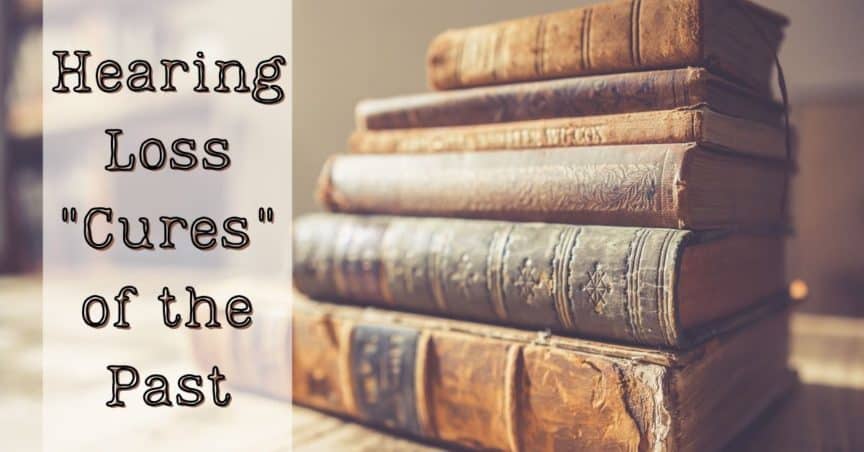 Today’s hearing aids continue to push the limits of what we ever believed possible. With features that can single out desired sounds in a crowded room, Bluetooth technology that interfaces with our phones and even Artificial Intelligence to automatically adjust to our listening environment, hearing aids continue to become easier to use and more effective than ever.

Let’s explore hearing loss remedies of the past to discover how far we have actually come!

Today we know that social isolation can only make hearing loss more pronounced causing our brain to atrophy when it is deprived of stimulation. This is a huge problem for seniors and those with mobility issues increasing the risk of developing dementia. Even so physicians of the past suspected that isolation could actually aid in curing hearing loss by giving your ears a rest from everyday use in order to recover. One of the most famous figures in history with hearing loss is Beethoven who was prescribed isolation to cure his hearing among other remedies such as almond oil ear plugs and electrocution to the ear, before he went completely deaf.

Thousand years ago, no matter what your ailment was, it was common to use bloodletting to cure the problem. A doctor would open a vein or use leeches to remove the poisoned or ill blood from the patient. While bloodletting is used today for a rare handful of diseases, most ancient applications of this process did more harm than good.  Hearing loss was no exception and often quickly progressed hearing loss into deafness, as the ears rely on a healthy supply of blood to hear.

Another cure of the past was blistering. Similar to bloodletting the concept was that a caustic plaster that damaged the skin was applied to the skin to create the blisters. When these blisters became infected, they would excrete puss that would remove toxins from the body that were causing hearing loss.

Today, we know that this practice is dangerous and completely ineffective. In fact the disease Myringitis is a viral form of acute middle ear infection causing eardrum to become inflamed and blistered. It can injure your hearing resulting in deafness if not treated in a timely manner.

Today there are instances of artificial hearing aids being used effectively to aid in hearing health. However in the 1800s created artificial eardrums, which did not perform as well. The artificial eardrums of the 1800s were generally built from metal and sat directly in the earlobe, to create resonance throughout the ear canal. These devices were sold as a cure-all for hearing ailments in magazines, regardless if the patient’s eardrum was punctured or not.

Insertion of Foreign Objects into the Ear

Today it is now common knowledge that is a terrible idea to stick anything in your ears – including a cotton swab!  Your ear canal is a very fragile place and any object in your ear could damage your hearing permanently. However this knowledge had to be learned the hard way. Some doctors of the past prescribed inserting twigs into the ear to relieve pressure and return hearing ability. Please learn from the past and refrain from sticking anything in your ear canal!

Another attempt to relieve pressure from the ear was to voluntarily jump from a great height. As you can imagine, this was likely to produce a few broken bones and not help with hearing loss at all!

Searching for a Cure

Even with all the strides in hearing health that we have made since the 19th century we still have yet to find a way to reverse most common forms of hearing loss.

A 2018 study from the European Journal of Neuroscience, attempted to re-grow the sensory hair cells found in the inner ear that convert sound vibrations into electrical signals for the brain to interpret. While they are a way off from developing this into an actual cure for hearing loss, it is an exciting step.

For now, we have advanced hearing aids to treat hearing loss! If you suspect that you or someone you love is dealing with hearing loss don’t let them try any of these “cures” of the past! Contact us to set up a hearing test so we can help you find the best treatment for your hearing loss.