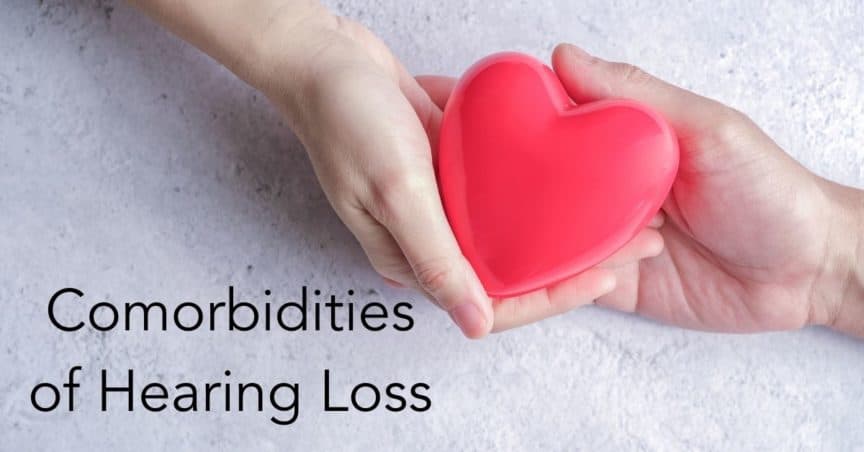 Hearing loss is one of the most common medical conditions that people navigate. Over 48 million people, nearly 1 in 5, have some degree of impaired hearing. Extensive research has established links between hearing loss and other medical conditions including cardiovascular disease and dementia. These associations are known as comorbidities which describe the coexistence of two or more chronic conditions. There are six common comorbid conditions – ranging from physical to mental health – that are associated with hearing loss:

In a 2015 study, researchers investigated the relationship between depression and hearing loss. The study included 18,318 participants, ages 18 and older who reported their hearing ability and completed a questionnaire assessing depressive symptoms. The findings included that the prevalence of moderate to severe depression was:

These statistics show that depression was more than twice as likely among people who have hearing loss. In exploring this link, experts have suggested that social withdrawal and loneliness, major effects of hearing loss, contribute to and exacerbate depression.

Hearing loss produces numerous symptoms that can significantly impact communication. This makes engaging in and following conversations difficult and exhausting. Strained communication can lead to avoiding conversations altogether because they require too much work. This means spending less time with family and friends, avoiding social gatherings, and isolating. Social withdrawal contributes to loneliness and depression which profoundly impacts mental health.

These significant statistics highlight two important findings: hearing loss contributes to cognitive decline and the severity of the hearing loss increases the risk.

Researchers who have studied this relationship have suggested that hearing loss can reduce cognitive capacity by:

Cardiovascular disease increases the risk of developing hearing loss. Numerous studies have established this link. Researchers have long established heart disease as a risk factor because it impacts blood flow which is important for hearing. Inadequate blood flow can impact the hair cells in the inner ear which are critical for helping the brain process sound waves.

Various studies have shown that people with hearing loss are more likely to experience falls. This includes a 2012 study which found that people with mild hearing loss were 3 times more likely to have a history of falling. Hearing loss reduces a person’s ability to hear and process sound which can contribute to less environmental awareness. This includes hearing warning signs (sirens, honks, voices) which leads to less awareness of the activities happening in the environment, making falls and tripping more likely.

People with diabetes are twice more likely to also experience hearing loss compared to people without diabetes. A 2008 study of over 11,000 participants found that:

Researchers suggest that this excess glucose (sugar) that remains in the bloodstream damages blood vessels and circulation in the body. This includes damaging the blood vessels in the inner ear which are integral to the auditory system.

Prioritize your hearing health by having your hearing evaluated. Hearing tests identify any impairment and is the first step in treating symptoms! Contact us today to schedule an appointment for a hearing test.