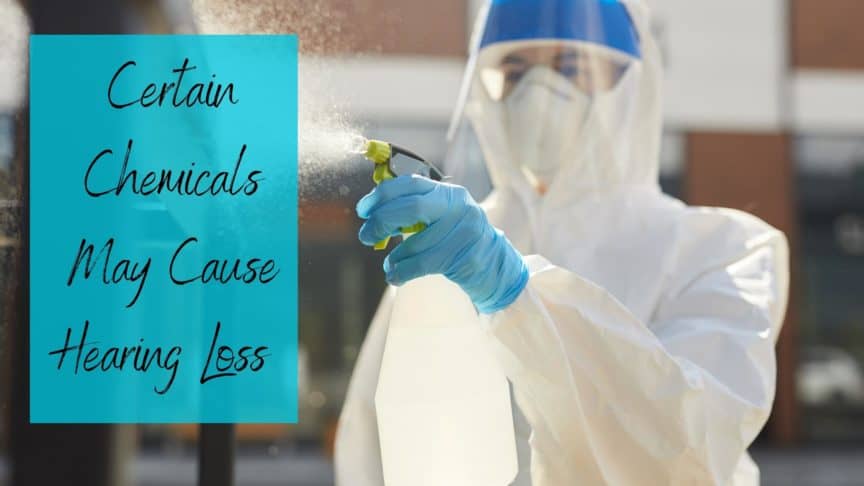 According to recent research, one out of every four American workers has already experienced exposure to hazardous noise at least once.

But other dangers at work could also lead to hearing loss, namely chemicals. Employees who are exposed to hazardous chemicals can permanently impair their hearing. Exposure to excessive amounts of these compounds is characterized as ototoxic, meaning it can cause hearing difficulties.

When hearing loss occurs due to exposure to chemicals or work-related conditions, the reason is often unknown. Over 750 different chemical groups are considered potentially ototoxic. Ototoxic substances can induce irreversible hearing loss, which results in the destruction of the cochlea.

By eating, inhaling, or absorbing ototoxins, people can damage the hair cells within the ear, called stereocilia. These are responsible for picking up sound signals. When they are damaged, the ability to pick up sound is also compromised.

What kinds of chemicals should we look out for?

Solvents are the chemicals most likely to be ototoxic. Machines and cleaning products both use solvents in the workplace. Gases, paints, metals, and insecticides can also be solvents.

Xylene, toluene, kerosene, ethanol, methanol, acetone, turpentine, and mineral spirits are the most frequent solvents found in the workplace. These clear, colorless liquids are known for having a strong odor. Many other substances, including benzene, carbon disulfide, ethylbenzene, hydrogen cyanide, lead, and mercury, are associated with hearing loss.

The harmful effects of noise-induced hearing loss may be exacerbated by ototoxic chemicals. Noise, in this case, increases blood flow in the inner ear, leading to the accumulation of ototoxic solvents in the inner ear, damaging the hearing organ.

Which jobs are at most risk of chemically-induced hearing loss?

There is a consensus that specific vocations, such as the military, firefighters, police, and mining, are inherently risky. Increased safety laws have clearly lowered the number of workplace-related injuries.

The silent killers, who are exposed to poisons as part of their day-to-day activities, are sometimes overlooked. Toxins such as carcinogens, neurotoxins, and others can take decades to manifest.

Industries that frequently expose workers to ototoxic compounds include:

Additionally, noise exposure can be an issue in many of these positions. These compounds amplify the noise damage.

The harmful effects of ototoxicity

You might not realize that hazardous substances in the environment are harming your hearing. The initial physical symptoms may appear as disturbances in balance and tinnitus. Where you did not previously feel that you were experiencing vertigo, you may be coping with vertigo and/or dizziness. Extra caution should be used when pregnant because these substances can harm your baby. Exposure to some solvents might even cause harm to an unborn child.

Limit exposure to chemicals at work.

Employers must provide workers exposed to dangerous compounds, such as ototoxic chemicals, with such information and training to give both training and health and safety information. To be safe, make sure you know which chemicals are known to be ototoxic in your workplace and work under a safety protocol that limits your exposure.

Proper ventilation should be employed when working with airborne ototoxic substances. Windows should be open, fans should be facing away from people, and you should only use the chemical for the amount of time you need it. Staying well-hydrated may also be of benefit.

Watch out for your medication.

In some cases, popular ototoxic drugs such as aspirin, quinine, loop diuretics, and aminoglycosides can damage the ears. Some medications can also be ototoxic. Research all medications you are taking.

Get your hearing tested

Paying attention to the well-being of your hearing is one of the most acceptable methods to preserve and improve it. The damage is usually irreversible if you were exposed to ototoxic substances.

The good news is that hearing loss can be cured, and treatment can be pretty effective. To engage in conversations, focus on work, and connect to the people in your life, these remarkable devices have been made to fit in your ear canal. Schedule an appointment for a hearing test with us immediately if you believe you are suffering hearing loss due to exposure to ototoxic substances.