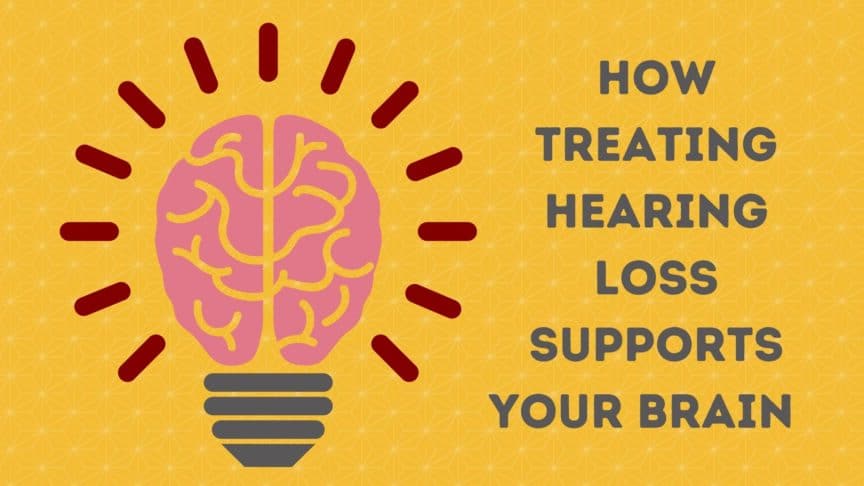 Many people think of hearing loss as an ear issue; however, your brain is just as affected. While we hear with our ears, we interpret this information once it is sent to our brain. If the sound never reaches our brain, then our mind is forced to process audio information with limited data. The brain is responsible for controlling the entire body’s motor functions, so if it is too wrapped up trying to interpret sound other areas of cognitive function inevitably suffer. While hearing loss is most time irreversible it can be effectively treated. The good news is that now, researchers are finding more evidence that finds that treating your hearing loss can relieve your brain from most of the stress and decline.

Our ears collect sound, and it is the job of the inner ear to send sound to the brain. The inner ear contains tiny hair-like cells which pick up audio waves and convert them to electrical pulses which are sent to the brain to interpret. Not only does the brain interpret what people are saying to and around you but also determining the location and proximity of the sound. For most people with hearing loss, it is actually caused by damage to these incredibly fragile hair-like cells. The damage in most cases develops slowly enough so that only some tones and pitches are lost at first. The brain is forced to work overtime to fill in these gaps and inevitably works harder as hearing loss increases.

Studying Hearing and the Brain

A recent study from the University of Colorado’s Department of Speech Language and Hearing Science examined how the brain hears. Neuroplasticity is the brain’s ability to reorganize itself and form new neural networks and pathways. When we are young, our brains have a lot of neuroplasticity which allows us to learn new skills and language quickly. As we age, neuroplasticity declines but still allows us to learn new skills. However, a growing population is experiencing hearing loss at younger ages due to exposure to loud sounds at a younger age than previous generations. The study determined that neuroplasticity may be doing more damage for a younger generation experiencing hearing loss. Researchers took EEG scans of the brain’s activity when responding to sounds and found that brains with higher neuroplasticity were almost too adaptive which took brain function from important brain tasks in order to compensate for a hearing impairment.

A study by Jamie Desjardins, PhD, an assistant professor in the speech-language pathology program at The University of Texas at El Paso, examined a group of individuals in their 50s and 60s who had never used hearing aids before, to determine the connection between brain function and hearing aid use. The participants were tested on cognitive health to measure their working memory, selective attention, and processing speed abilities before and after using hearing aids. After only two weeks of wearing hearing aids, the study participants displayed an increase in all areas of cognitive function.

Unfortunately, when hearing loss is ignored it is all too common for people to suffer from cognitive decline, regardless of age. “Most people will experience hearing loss in their lifetime,” Desjardins explained. “Think about somebody who has hearing loss and is still working and they’re not wearing hearing aids. They are spending so much of their brainpower just trying to focus on listening. They may not be able to perform their job as well. Or if they can, they’re exhausted because they are working so much harder. They are more tired at the end of the day, because it’s a lot more taxing. It affects their quality of life.”

The sooner you invest in your hearing health the sooner you can start to fight the risk of cognitive decline. If you suspect you are having trouble hearing, no matter your age, make sure to schedule a hearing test right away. The evidence shows over and over again that hearing aids can improve the quality of your life and the sooner you deal with it, the sooner you can focus on the things that really matter to you.