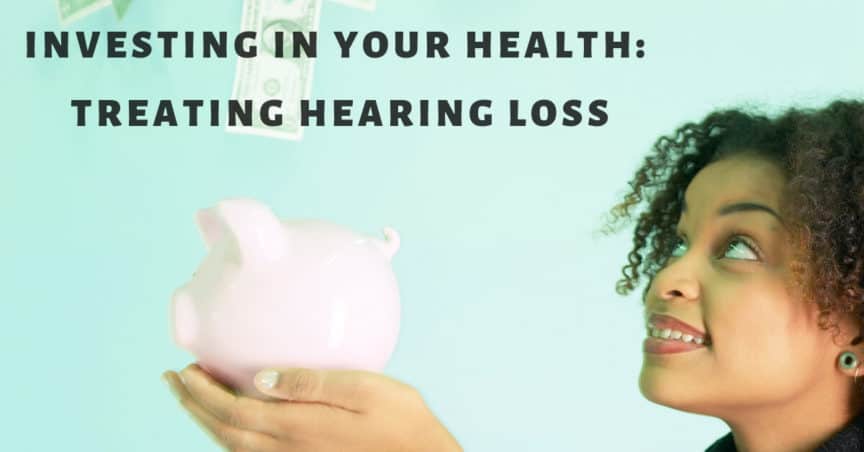 Someone’s sitting in the shade today because someone planted a tree a long time ago.

For those who are into personal finance, conversations usually revolve around interest and index funds, IRAs and 401(k)s, work, savings, passive income, real estate, and other matters. But they don’t usually talk about investing in one’s health. In the long-term however, taking care of your health might be one of the most prudent investments you could make.

And investing in your hearing health is a great place to start. Hearing loss is one of the most common conditions affecting adults, and the most common among older adults. About 30 to 48 million Americans have hearing loss that has a negative impact on their day-to-day life.

But most older adults wait an average of 7 years before they seek help, says a 2012 report in Healthy Hearing magazine. And the longer you wait, the more difficult it will be for your ears to adjust to hearing aids. But if we ‘invest’ in our hearing health early on, just like compound interest, we can begin to reap larger benefits in the future. Here’s a guide to the benefits you can expect to enjoy.

In a large survey by the National Council on the Aging, two-thirds of older adults with untreated hearing loss offered their reason for refusing to get a hearing aid. They responded with statements like “my hearing is not bad enough” or “I can get along without one,” and at least one in five remarked that they were concerned about how old they would look while wearing one.

But they didn’t know what they were missing out on. Those in the same survey who had hearing aids were profiting substantially. All things considered, hearing aid wearers were more socially connected and less likely to be stressed, paranoid or depressed. And their relatives and companions were significantly more likely to have noticed these changes.

The same conclusion was also found in a study done this year, by The Gerontologist, which found that compared to people without hearing loss, older adults with any form of hearing loss were about 47 percent more likely to display symptoms of depression.

Return #2: A reduced risk of dementia

As we reach our golden years, the threat of mental diseases such as dementia becomes more pressing. But by investing in hearing aids, you can slow the progress of dementia by up to 75 per cent, according to a study by British academics. The scientists, working with Manchester University in England, believe that keeping older people engaged and active by using the devices can significantly reduce cognitive decline.

Observing the development of 2,040 people from 1996 and 2014, researchers got them to complete word memory tests at points along the way. They then observed the rate of decrease prior to getting a hearing aid, and once again then after they had acquired a device and had begun using it on a daily basis.

The researchers found that while the hearing aids did not stop people from experiencing cognitive decline, they were able to stem the decline by an average of seventy-five percent. This is a significant decline, and if further research reveals similar results, will position hearing aids as the single most effective weapon in the fight against dementia.

A recent study by Eurotrak found that more than half of hearing aid said they felt more secure and had more physical independence while wearing their listening devices. When hearing is improved, our spatial awareness is improved, which makes it easier to manage the common pitfalls we might encounter from living a city life, such as traffic hazards.

Conversely, people with untreated poor hearing are at an increased risk of accidents. Using the results from a nationwide health survey conducted by the Centers for Disease Control and Prevention, researchers found that compared to individuals who described their hearing as “excellent,” those who said they had a little trouble hearing were 60 percent more likely to get into an accident. Those with “moderate” hearing problems fared worse, and were 70 percent more likely to have an accidental injury.

An investment in your hearing health, unlike real investments, will never let you down. See how you can ‘start investing’ today, by scheduling a consultation with Ear-Tronics today.