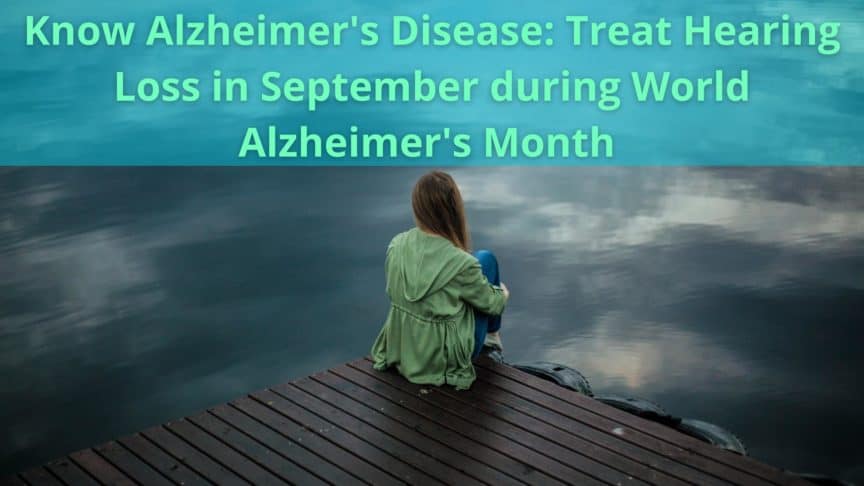 Is there someone in your life who you feel is having trouble remembering times you’ve spent together in the past, or even how to do everyday tasks? In 2020, the Centers for Disease Control (CDC) estimated that as many as 5.8 million Americans were living with Alzheimer’s disease which means the odds that someone close to you is dealing with the condition are high.

It’s important to understand that you are not alone in this. Every September, people come together under the umbrella of World Alzheimer’s Month to advocate, raise awareness, and fight the stigma around this debilitating brain disease.

What is Alzheimer’s Disease?

Alzheimer’s disease is the most common type of dementia. This progressive brain disease starts with subtle memory loss and slowly develops into the loss of being able to complete simple daily tasks and carry-on conversation. This is because Alzheimer’s disease affects parts of the brain that control thought, memory, and language.

While scientists do not yet fully understand what causes Alzheimer’s disease, they understand it occurs from the damage of cells in the brain, which affects the brains cell’s ability to communicate with each other. Scientists speculate that there is most likely not a single cause but rather multiple factors that can affect individuals differently. The greatest risk factor for Alzheimer’s disease is age, though not everyone of advanced age has this issue. Other factors include family history, and lifestyle. Studies have found that with adequate physical activity, a nutritious diet, limited alcohol consumption, and avoiding smoking may help to lower the risk, even with a family history.

Regardless, the effects of Alzheimer’s often manifest early as changes in the brain, years before the first symptoms appear. Therefore, treating hearing loss is important to preventing or delaying the onset of Alzheimer’s and other forms of dementia. In many cases, researchers have found that hearing loss can even cause brain atrophy, also known as shrinkage. People speculate that this has to do with the brain’s response to hearing impairment. Hearing impairment causes the brain to strain to hear and fill in the blanks that were not transmitted. This can be exhausting for the brain, the body and social situations. Hearing loss affects communication which in turn can make people less likely to stay active and social.

In 2020, when most of the world was in quarantine, the Lancet completed a comprehensive study identifying an extended set of 12 modifiable risk factors that might prevent or delay up to 40 per cent of dementia. The report Dementia prevention, intervention, and care: 2020 report of the Lancet Commission added three modifiable risks to the previous nine identified in the 2017 Lancet Commission on dementia prevention, intervention, and care. These new risks identified excessive alcohol use, head trauma and air pollution to the previous nine, which are:

The benefit of identifying these risks is that you can modify them now, before the devastating effects of dementia and Alzheimer’s can manifest and disrupt not only your life, but the lives of the people who love you. It’s a difficult condition for your loved ones’ as they feel like they’ve lost you, even while you are still alive, but eventually unable to remember the memories you’ve shared and communicate as you one did.

Hearing loss is an example of a modifiable risk, as it is a factor which you can address now. Hearing loss can cause social disconnection which can often be misdiagnosed as the early signs of Alzheimer’s Disease, and add to lack of activity, under socialization, and chronic depression. While there is no cure for hearing loss it can be treated effectively by using hearing aids. These amazing electronic devices amplify sound so you can hear, continue social activity, exercise, and improve relationships. Addressing hearing loss now can fight depression as well, which can keep you motivated and connected to the life you love, as you age.

The sooner you treat your hearing, the more of a chance you have to prevent dementia before it can progress to a condition which interrupts the quality of your life. The first step is to schedule a hearing test so we can better understand the state of your condition and find the best treatment to keep you active and healthy for years to come.