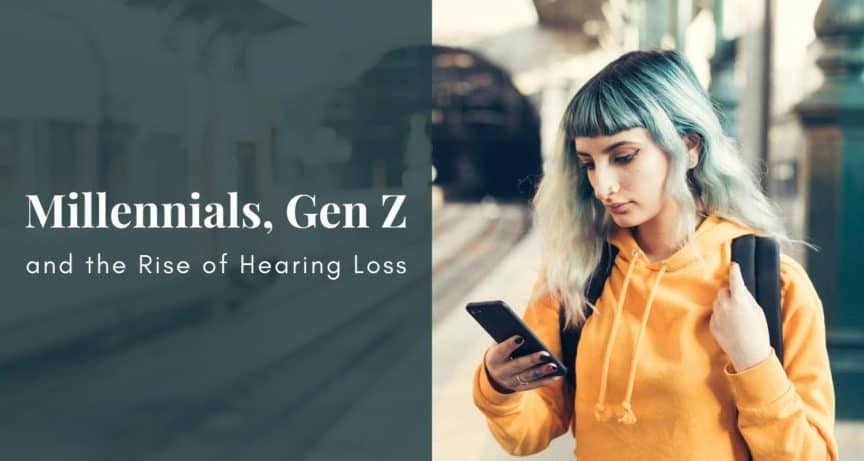 Hearing loss is the third most chronic condition for older adults in the US affecting 1 in 3 people over the age of 65 and half of all 75 and older. Even so, hearing loss can affect people of any age. The U.S. Centers for Disease Control (CDC) estimates that 10% of Millennials have some degree of hearing loss and the World Health Organization (WHO) estimates that 43 million people globally, between the ages 12-35 have disabling hearing loss.

Hearing Loss on The Rise

What was once considered a condition affecting mostly seniors is on the rise across generations such as Millennials and Generation Z. While the rise in hearing loss in younger generations is not confirmed, many believe it is attributed to a world culture of increased digital media usage than in the past. Particularly the wide use of personal listening devices such as MP3 players through headphones puts a younger generation at risk. Today there is a seemingly endless stream of music, movies, podcasts and more. Many people, particularly younger generations, don’t understand what safe listening practices are. As a result, WHO estimates that 1.1 billion teenagers and young adults worldwide are vulnerable to hearing loss due to unsafe use of personal audio devices.

There are several factors which contribute to hearing loss including chronic ear infection, impact to the head, exposure to certain chemicals and certain medications. However, the most well-known cause of hearing loss is noise induced. The auditory system is complex, collecting audio waves through a series of vibrations. When sound reaches the inner ear, vibrations are sent to tiny hair like cells called stereocilia, which rest in fluid, held in the tiny shell shaped cochlea.

Vibrations move the fluid within the cochlea, which stimulates the stereocilia. The stereocilia then convert these vibrations into electrical impulses which are received by the brain and interpreted as sound and speech. The stereocilia are incredibly susceptible to extreme levels of sound and can sustain damage when rattled too severely against the membrane wall, which encases them. When exposed to extreme levels of noise for too long, it can leave people of all ages with permanent noise induced hearing loss.

How Loud is Too Loud?

The intensity, or loudness of sound is measured in decibels. It’s safe to listen to any sound under 70dB indefinitely. Sounds past 70dB can start to cause stress and fatigue when constantly exposed, such as the case with neighborhood noise pollution, however, any sound which measures past 85dB can start to cause permanent hearing loss. It’s not just the level of sound but the length of exposure. It takes around eight hours of constant exposure at 85dB for damage to occur, however as decibels rise the time for damage to begin, shrinks quickly. At a five-degree increase of 90dB, it takes less than an hour of exposure for hearing loss to occur.

Knowing the Decibel Level in Your Environment

The issue for many Millennials and Generation Z is that they are not aware of the risk to the ears. Many enjoy loud concerts or sporting events and don’t understand the lasting damage it can cause. For perspective, here are a few household items, which many are unaware, could be damaging hearing:

Personal Listening Devices: Common personal electronic devices, such as smartphones, speakers, iPad have the potential to easily surpass 100dB which can cause hearing damage in under 15 minutes. Unfortunately, due to endless streaming capacity, many subject themselves to these dangerous decibels far past safe listening limits.

City Traffic: However, it’s not just loud concerts and personal listening devices which cause damage. If you live in a loud neighborhood or have a commute it could be causing damage. Walking or driving through city traffic can expose people to sounds that are 80-90dB. An hour of this type of exposure daily can start to add up over time.

Occupational Hazards: Even your work environment could contribute to hearing loss. It’s one of the most common sources of noise-induced hearing loss. The Hearing Health Foundation estimates that 22 million people are exposed to hazardous noise levels at work yearly.

It is important to be aware of your listening environments and be prepared with hearing protection when sounds surpass a safe listening level. However, if you suspect you already have some degree of hearing loss it’s important to address it as soon as possible. Schedule a hearing exam today, no matter your age. You’re never “too young” to have hearing loss.